Monku was 7 years old now and fast growing into a rebellious pre-teen like so many others in his age group. He questioned everything and never agreed to anything without a trade. Dad was growing increasingly anxious and impatient with the boy. This was a time when things could go horribly wrong or beautifully right for a growing monkey kid.

Like every morning the day began early. At the breakfast table though it was only dad and son as mom had left last evening to visit the grandparents. Dad moved the glass of chocolate milk in front of Monku and returned to his bowl to cereals. Monku was not in the mood to drink milk. He pushed it away. Dad cleared his throat and growled “what?”. Monku replied “I don’t want to drink milk”. Dad snorted back “drink it right away or I’ll pour it all on your head”. Monku knew this could never happen. He dug in his heels and refused to budge. Dad was at the edge of his patience, he was already late for work and was trying to be calm but this was too much for him. Besides Monku chose a very wrong day to exercise his will, mom was not there to act as a buffer. Dad got up and walked across the table he stood right behind Monku leaned over picked up the glass of milk and poured it calmly over Monku’s head. Then even before Monku realized what had just happened he turned around picked up his bag and was out the door. The milk was still trickling down Monkus’ back by the time he heard the car back out and drive away. 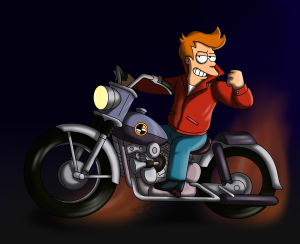 Monku was aghast, he was not used to being treated in such a nonchalant manner. Certainly did not expect dad to do what he had just done. This was preposterous to say the least, mom would’ve thrown such a fit watching dad do this. She would’ve been really angry with him. But, mom was not home. She was gone for two full days. What was he supposed to do? Monku was sure he did not want to cross paths with the old man without the protective cover of his mom. He took only a moments time to decide what he was going to do.

Walking across the field on his way to the river side Monku was feeling increasingly free. Yes, freedom, this is how it felt. He had broken free of dad and his stupid discipline, his rules. No waking up at 5:30AM and going for long running trips, no doing 10 rounds of the football field on his bicycle before 7AM. No getting a shower and changing into school clothes 20 minutes before the bus showed up at the gate. No shining his shoes everyday and above all no drinking a glass of warm milk before heading out the door. He was free. A glass of milk on his head was not acceptable. He was leaving home. 10 minutes back as he got up from the table and burst out the front door he was furious about what his dad had done, now he was calmer. As he stepped into the cool water at the edge of the river he felt good. He kept walking further and then he walked ahead a little more. The water was up to his chin by now, yes exactly what dad always told him not to do. Monku did not know how to swim and whenever dad took him out fishing he made sure that Monku did not go deeper than his waist but today was about defiance and as Monku saw it it was about freedom. That’s what he was thinking with his eyes on a cloud high up when he slipped on a slippery smooth stone, and the water passed over the milk matted hair on the top of his head.

Gorky, the bear was standing waist deep in water on his hind legs while deftly pulling out 6 pound salmon from the stream and devouring them in one swift move. The cold season was when salmon was in abundant supply. This was feast season, time to stock up on loads and loads of salmon fat, make reserves for the next 4 months when the river would be frozen solid and salmon would be only a wild fantasy in his dreams. He heard a commotion behind him and swiftly turned around expecting another aggressive bear come to dislodge him from his vantage point. Bears often fought savagely over rocky ledges in the river as it was much easier to trap and catch salmon when they tried to jump over the rocky ledge. But what he saw was a monkey, actually a baby monkey, thrashing about wildly and drowning. Certainly he was drowning from the sounds he was making. Gorky was holding a really fat pink salmon in his paws. He looked at it and thought of biting off the head, the salmon looked back at him with bulbous eyes pleadingly. Gorky tossed the poor sot back into the water and with a shake of his head dived into the water. The fish swam away as fast as it could.

Gorky reached Monku just in the nick of time, he was about to go under for the third time and legend has it that the third time is the killer. You certainly drown to your death if you go under for the third time. Gorky grabbed Monku by the scruff of his neck as gently as his sharp claws would allow and pulled him up. It was a pathetic sight to watch. The scrawny monkey baby held in the clasps of this huge enormous grizzly bear. As Gorky walked back to the shore he was grumbling under his breath “why should I be rescuing this idiot, whoever let him near the river”… anyway as he deposited the monkey baby on the soft sand away from the water he felt he should ask. “What’s up dude why were you so deep in the water?”. Monku had caught his breath on the way back from the river and he was slightly more composed by now. He told Gorky the story of his day so far. Gorky doubled up and rolled over with laughter when he heard of the glass of milk on the kids head. He stood up finally and said “listen kiddo you are too little to be out here on your own, as for your dad he was trying to be good to you the least you can do is listen to him and learn. Go back home before you hurt yourself seriously”. Saying this the grizzly turned around and bounded back into the water back to his perch on the rocky ledge.

Monku got up and shook off the excess water from his body. Then he started walking. He was admittedly shaken but obviously not enough to turn around and walk home. He decided that the river was dangerous so he needed to stay away from the water. He started walking towards the part of the forest where the tall trees grew. As he neared that area he noticed a bunch of giraffes nibbling on the soft leaves of the Baobab tree. These were such tall creatures that all they had to do was stand straight and nibble at the leaves at the very top of huge trees. Magnificent was the word that automatically came to mind when you saw these creatures. As Monku walked closer to them he realized his stomach was growling. Walking up to the closest giraffe he asked “is it OK if I were to eat some of the leaves?” the Giraffe, Zippy, was busy tucking in and couldn’t be bothered, he just wagged his small tail and grunted an approval “go ahead, knock yourself out”. Happy to have found approval Monku located the most juicy looking shrub and proceeded to voraciously chomp away. As he started filling up Monku felt a strange queasy feeling in the pit of his tummy. It started as a small quiver and by the time he could realize what was happening Monku was doubled over with pain in his tummy. He was puking uncontrollably in another minute. The giraffes all gathered around him and Zippy tapped the monkey kid, who was by now lying on his back writhing about in pain, with his padded foot, “supp dude what did you eat?” . That’s when he noticed the clump of zariza bush which was half eaten. “No way you did not eat zariza did you, you idiot?”. To think the day had just started and it wasn’t even mid day yet…. Monku had successfully landed himself in a life threatening situation for the second time. The Zariza plant was to be avoided at all costs, it had hallucinogenic properties and a kid eating so much of it was bound to end up very sick for a while. Monku saw the whole forest swimming in front of him and the sounds seemed to be coming from deep inside a metallic tunnel…. well that’s the last he saw as soon he passed out and fell asleep on his side.

When he finally came to Monku was experiencing a splitting headache but the pain in his tummy was gone and the world seemed to have stabilized. Zippy was standing over him along with Jimbo the elephant. Jimbo was poised with his trunk raised high ready to shower Monku with water he had brought all the way from the river bank. They looked much relieved when the monkey kid opened his eyes and looked at them all shocked. “So young man what are you up to in these parts? and why were you nibbling on Zariza? Don’t you know it’s poionous for a kid your age, it was lucky we had Dr. Jimbo close by or else you were a goner today”.

The monkey baby had had his fill for the day, actually for a month, make that a lifetime. He had a few more things to learn before he could venture out on his own. Till then he had to learn from his parents. The walk back home was long but it was determined and it helped clear his head of all the cobwebs that were clouding his head. That evening he actually made tea for dad when he got back from work. That was a first, it was a start.