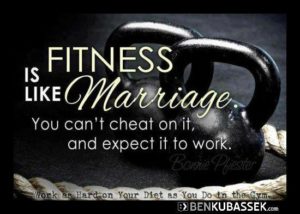 an old someone-from-school sent that image on the school group recently…. my response as expected was an over reaction….

thought provoking…. I usually do not make sense to most people but then anyway here goes (my two cents as usual)…

“depends on what one considers cheating…. with fitness there are rest days as well as reward diet days…. of course it’s difficult to see how those would work in a marriage context…. but then again it need not be such hard work either…. after a point marriage like fitness like marriage (yes that repetition was intentional) becomes a habit and you start enjoying it… at that point skipping a day or two would make one feel uncomfortable and guilty…. in effect you can’t opt out even if you have the opportunity…. it just wouldn’t feel right anymore…. it’s the early days when you’re building the discipline when it’s a struggle after that you’re pretty much on autopilot….